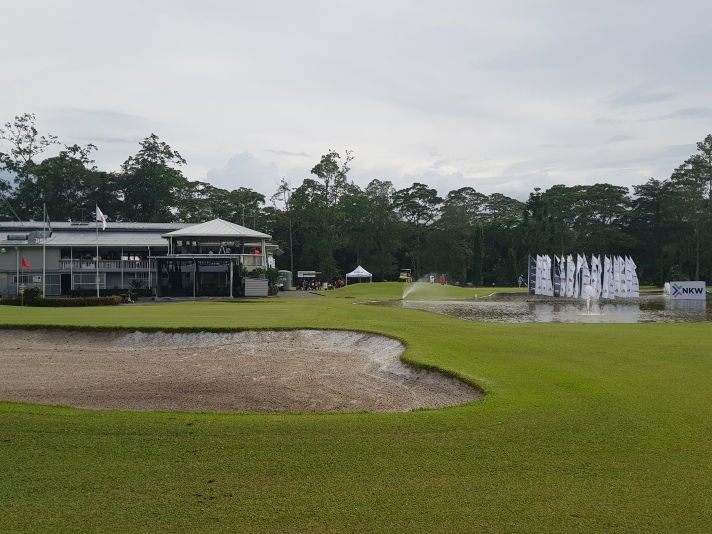 The yearly Tour stop in PNG has come and gone once again. This year it was my 11th or 12th trip up there and over the years I have had many good results so it’s always a couple of weeks that I look forward to.

The first week is the Morobe Open at the Lae GC. It’s a good fun course which is not overly long but rather tight off the tees, so keeping it in the short stuff is a must. I came out of the blocks firing, shooting 65(-6) & 66(-5) to be 1 shot behind going into the weekend. Day 3 was a big rollercoaster ride with many ups and downs. I started hot and was -4 after 6 holes whilst Brett Rankin who was the overnight leader played that 6 hole stretch +1….so all of a sudden I had a 4 shot lead!! From there things didn’t go as planned. I didn’t feel any different, wasn’t nervous or anything but things just didn’t happen for me. I made a soft bogey on the 7th hole from nowhere and struggled to get momentum back. I ended up dropping 3 more shots on the back 9 whilst Brett played the back 9 in -6…so the 4 shot lead disappeared to a 7 shot deficit. This was very disappointing however I was still in equal 2nd with a round to go. Knew it was going to need something special on the final day to have any shot at winning and over the first 13 holes I played some nice golf and had myself at -5 for the day. A couple of wayward drives over the concluding holes derailed any chance of making some birdies to finish and I ended up shooting 68(-3) to finish in 3rd position on 270(-14)

The second week we were back in Port Moresby for the PNG Open, this event is part of the Australasian Tour schedule so its a great opportunity to get some money up for the OOM. Was confident that I could back up the play from the previous week so was looking forward to making it happen. The Royal Port Moresby GC is pretty different to Lae, there is a lot more elevation change and there is more shape to the course as well…the fairways are probably wider than Lae but once you are in the trees they are much harder to get out of, they are much thicker and denser.

Wasn’t able to keep the gameplay going from the previous week, battled so hard to keep the ball in play but just couldn’t make it happen. The story of the week was 17/56 fairways which around that golf course makes it extremely difficult to have a good score. Was proud of myself the way I was able to hang in there after continually missing the fairways, grinded my ass off and feel that I did really well considering where I hit it. Shot rounds of 69(-3) 72(E) 72(E) 70(-2) to finish in T-31st. Overall it was a successful trip to PNG, thanks to Wayne and James from Dunlop PNG for looking after me in Lae and to Judi & Mike in Port Moresby..I look forward to going back next year and having another crack to get the W over there.

After a week at home with no events to wind down after PNG the Sydney Meriton Invitational was on across 3 days, NSW, St Michael’s The Lakes were the venues.

Everyone plays Stableford and there is a team scratch and nett event as well. We couldn’t have asked for better conditions on all 3 days, Sydney really turned it on. I’ve got to be honest after the way I drove it in PNG the second week I was a little nervous with how I would go around these courses….they aren’t the friendliest off the tee!!

It’s funny how different things can be, after driving the ball probably as bad as I ever have my driver for the 3 days was overall very good, the last day at the Lakes, in particular, I drove it awesome. Scored ok for the week but felt as though I left a few shots out there each day. Shot scores of 33pts, 37pts, and 38pts to finish in T-13th

Thanks to my teammates for a great 3 days, Brad Fensom, Duncan Blyth and Danny Barton….look forward to another crack at in 2020.